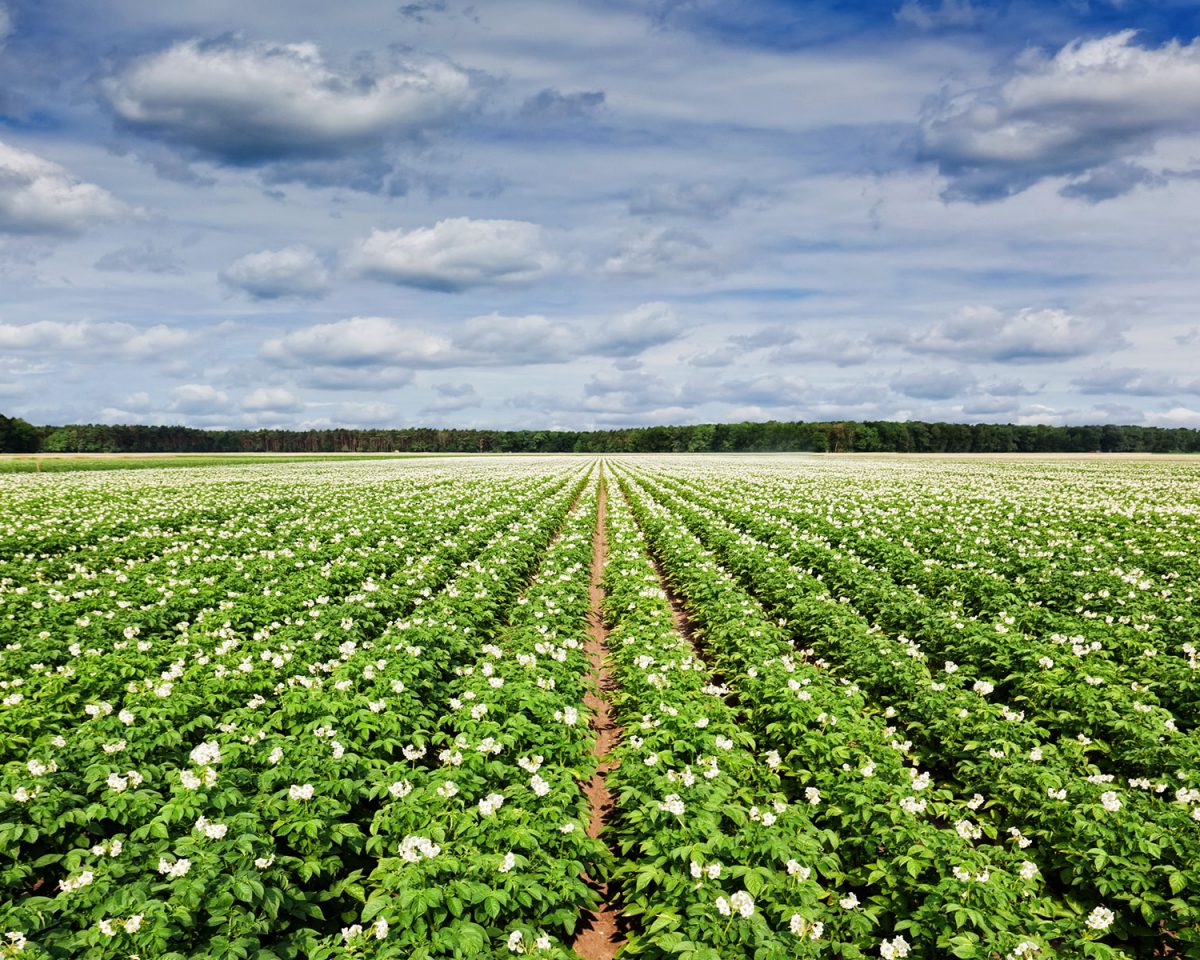 Producing potatoes on reclaimed land that is barely at sea level has its own challenges and that’s before you factor in the extraordinary weather of the past year.

That meant that – like many other growers – Neil and Victoria Webster spent part of March lifting last year’s crops on the same day they started planting this year’s.

They have a thriving business at Whams Farm, Scarisbrick in West Lancashire, growing some 600 acres of potatoes on their home farm and on rented land across the county.

They serve a variety of markets and are one of the chief suppliers of potatoes to the Five Guys restaurant group, so product quality is crucial.

So too is ensuring that the maximum proportion of their crops meet the size and quality specifications their various clients demand, and changes in their fertilizer regime are helping ensure they meet both of those aims.

Whams Farm is 406 acres of reclaimed land that is mainly black peaty soils. One advantage of being reclaimed land, Neil notes, is that the fields are broadly square which makes field operations simpler.

As well as some 70 acres of potatoes they grow cereals and produce turf, and also rent land out to local salad producers:

“That arrangement works very well with the neighbours, and means we have a good rotation and cashflow”, says Neil.

The rest of their potatoes are grown on rented lands within a 30-mile radius of their home farm, where they also have 3,500 tonnes of storage capacity.

In a normal year they start planting in mid-March and complete it in May, although this year is obviously going to be very different and difficult:

“On these peaty soils we don’t want to start planting too early because we are prone to get late frosts here”.

Crops are planted with a base dressing that supplies nitrogen, potash, phosphate and sulphur

During the season they receive between 120 and 200 units of nitrogen, with both suspension and compound fertilizers being used.

Like many growers, Neil has tried a range of additional sources of nutrients to improve crop yields and quality.

He finally settled on a combination of BioNature products after being introduced to them by his agronomist David Valentine and agreeing to do a field trial:

“We divided one field in half and used our standard regime on one half and added the BioNature products for the other half to give it a really true test.

“Yields were 20 tonnes/acre with the standard regime and between 22 and 23t/acre with it. In addition the BioNature treated crops had better uniformity of size and their skin finish was better.

“As a result a much greater proportion of the crop at the ideal marketable size.

“We grow Innovator, which is a hungry variety that benefits from having nutrients supplied little and often through the growing season.

“Before we discovered our current regime we had tried all sorts of other products without really finding a solution that works.

“The BioNature products can be applied with blight sprays, so that saves the time and expense of a separate application.

“We start applications at ‘rosette’ stage and continue as long as needed for the crops to reach the required size. We start test digging in mid-August to check on tuber size and health”.

Blight sprays are usually applied once every seven to ten days during the season – more frequently if the pressure high, and they apply the additional nutrients with every other spray:

“We use NHCaDelta, which supplies 15% nitrogen and 7% calcium, combined with 1-4-All, which contains a broad spectrum of micronutrients and trace elements.

“We did a trial five years ago dividing a field in half and treating one side with the BioNature products on top of our existing regime, and the other with the standard treatment.

“Overall yield was increased by around 10%, and much more of that yield was in the target size range of over 50mm.

“In addition we found no internal problems and the potatoes looked a lot healthier, which we felt was due to the calcium encouraging much better and stronger cell development.

“The crops seemed to suffer much less stress and problems like cracking were greatly reduced”.

The regime has continued to work over the past three years despite widely varying growing seasons:

“In the past three years we have had extremes of drought and wet weather yet despite everything the crops’ skin finish is consistently better and they keep better in store”.

Agronomist David Valentine staged trials on a number of farms – the Websters among them – to test different fertilizer regimes, in response to customer demand:
His clients were looking for ways to make their production systems more robust:

“One key aim was to find a source of micronutrients to mix with the suspension fertilisers we supply, and which would provide essential trace and micro-elements.

“We tested a range of products in the field and BioNature fertilisers proved successful. After five years’ experience everyone knows the system works”.

The programme includes two of the company’s products.

NHCaDelta is a soil/foliar fertilizer which supplied stabilized nitrogen with calcium to aid root and cell development, and also improve yield and stress resistance.

1-4-All contains micro-elements and nutrients like iron, manganese, magnesium, zinc, boron and copper to aid the plant’s metabolic processes.

Both can be mixed with either blight sprays or insecticides. That flexibility of use is a crucial benefit, he says:

“Once we have tuber initiation we can start a programme applying 2.5litres/ha of NHCaDelta and one litre of 1-4-All.

“We have used it with blight sprays most often, but it mixes very easily with a wide range of fungicides and insecticides.

“Growers are always looking for greater quality, skin finish and uniformity and these products seem to achieve that”.

They really showed their worth in the dry year of 2018, says David:

“They promote the efficient uptake of other applied nutrients by amplifying the plant’s metabolic activity and ensure the nutrients are fully utilized.

“In 2018’s dry conditions many of the growers commented on how well the crops kept growing, and we’re sure the fertilizer regime played a key role in that”.